Peter van Deutekom is a former operator, programmer and system analyst. He experienced the switch from ‘development’ to ‘infrastructure’ and thus collected more than thirty years experience in the management of ICT departments. All that experience is bundled in Time IT.

Practice proves it: Time IT works! 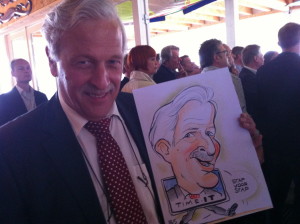 In 2003 he founded his own organisation, named Mirada BV and became active as a Program/Project Manager at different organisations.

Van Deutekom made his first freelance steps as ICT consultant. ‘I was asked to migrate data from several systems to one SAP-system. That required an action plan. I then developed a method based on existing software like Excel, that I extended with macros and procedures.’

Van Deutekom saw his method was copied in organisations all over the country. ‘we decided to integrate my expertise in an even better system: Time IT, marketed by Mirada.’ In 2011 Peter stops the consultancy work and completely dedicates himself to the further development of the system. He also assists companies for the implementation of Time IT.

Van Deutekom excitedly speaks about his system. We have built it in such a way that it not only is suited for planning and steering projects in ICT, but also in other sectors. A strong point is that all steps in the plan are steered at the right time and by the right people, via real-time communication tools.

Over the past years more than 600 action plans were successfully finished with Time IT. And there are constant new implementations at new customers. Van Deutekom: ‘It helps you creating clear action plans: what must be done, by whom, what are the dependencies, when must it be done, what is the necessary time and when must it be finished? Universal questions in each project.’

Up to 50% less interruption risk

‘Time IT forces people to think what should happen, which ensures they work structurally’, says Van Deutekom. If you choose Time IT, you choose for consistency in project management: ‘That saves at least half the time in the preparation and application and therefore lots of money. In addition improved communication and evaluation lowers the interruption risk by 35 to 50%.’